I Bricked My Surface Pro

I just found out the hard way that there are major issues upgrading from Windows 8.1 RTM to Windows 8.1 GA.  (What is “GA”?)  I figured that downloading the 8.1GA and installing it would update everything that needed to be updated, but alas, that was a colossal failure.  It seems that about half of it works.

The metro/tile side of Windows is now worthless.  Every time I click on a tile, it shows the splash screen and then either reverts back to the metro view or just hangs on the metro screen indefinitely.  I can tap the Desktop tile which will successfully load that “side” of Windows and from there I can access the control panel and all of that jazz. 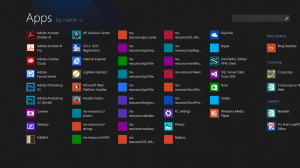 They all failed.  I was constantly receiving an error indicating that the recovery partition could not be found, or I was receiving a prompt to insert the media.  Apparently I should have created a recovery disk before the upgrade, but I’ve never had an automated process from Microsoft fail so catastrophically before.  Lesson learned.  Always create a recovery drive for a device.

@Surface on Twitter was helpful in proving some troubleshooting ideas, but nothing worked.  I ended up on the phone with Surface Tech Support and they confirmed that there is no recovery image available for download for the Surface Pro (but apparently there is one for the Surface RT, go figure).  Apparently if I had a second Surface Pro, I could create an image and move it over, but I only have have one.  With no way to access or create a recovery drive, I was stuck so Microsoft is sending me a replacement Surface Pro.

I tried to see if I could upgrade my Surface Pro [1] to the Surface Pro 2 and pay the difference, but they don’t have an upgrade program to accommodate this.  I wish they did for us early adopters who have a decent amount of money invested in the Surface product line

So hopefully FedEx will be delivering my Surface Pro in the next day or so.  Microsoft wouldn’t guarantee wouldn’t guarantee that it’s not a refurbished machine, but at least it’ll run.  They said it’ll probably come shipped with 8.1 preinstalled, so hopefully that will save me the headache of upgrading.

Update 12/5/2013: The replacement Surface came preinstalled with Windows 8.0 and not 8.1 as I had hoped.  The upgrade to 8.1 went smoothly, though! I was also able to reinstall Windows on the Surface with few issues.