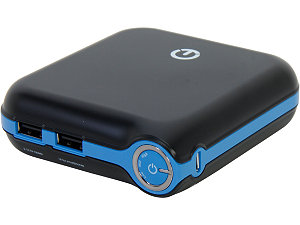 About two months ago I purchased the iCarrier IMP120D to replace an old portable battery that died on me. I was impressed by the long 12,000 mAh capacity specification and figured I’d give it a try.

I ran it through the standard process of fully charging it and then proceeded to use it intermittently for changing my cell phone. All in all it performed pretty well and provided many days of cell phone charging without having to recharge the iCarrier, but there were no standout performance indicators that it was any better or worse than any other chargers until I had an opportunity to really put it through its paces.

I fully charged it overnight and then took it on a weekend trip where I used it to recharge my cell phone for a few hours on the train ride home. The real test came yesterday when my wall charger failed and I woke up with a completely discharged cell phone battery, so I figured I’d give the iCarrier a shot and see how it performed all day. My goal was to charge and power everything that normally gets charged via USB through the iCarrier. I started out by charging my Nokia Lumia 929/Icon to 50% and then headed out for a day of meetings. Throughout the day I successfully recharged my Plantronics Voyager Bluetooth headset and the corresponding charging case as well as my MiFi mobile hotspot. All three of those devices were completely discharged when I started and 100% charged when finishing. I also powered by TomTom navigation system for about 60 miles worth of driving and when I got home I was able to recharge my phone again from about 5% to 80% before I finally ran out of juice on the iCarrier.

It’s important to note that I did not recharge the iCarrier between the train ride and my test yesterday.

All in all, the iCarrier performed better than I expected. It managed to power all of my devices for a full day without resorting to plugging anything in to the wall. Powering the nav system was probably overkill, but at least it gave me comfort that I could add additional load to it and still have it get through a day – even when not starting at 100%. I’d probably be able to get through 3-4 days of full charging for my cell phone if I didn’t try to charge everything else at the same time. In fact the only thing I didn’t try to charge was my Surface tablet and that was just because there isn’t a native way to do this. Maybe I’ll try to create a custom cable for my next test.

Overall my impressions of the iCarrier were favorable. It contains a strong battery capable of holding a charge over a few weeks of inactivity and still powered more devices than the average user would try to use it for in a given day.
One thing that I noticed after a day of travel is that the innards have come lose from the case and bang around inside. It looks like the case is ultrasonically welded so I don’t think there is an issue of it coming apart, but I don’t know if the vibrations will be an issue in the long run.

The other important thing to note is that this device is HEAVY! Coming in at over a half of a pound (9.5oz) this is by far the heaviest battery backup I’ve owned. All of that weight is presumably the batteries which give it the long run time, but know that it’s a considerable weight to add to your everyday carry. (By comparison, the Surface tablet is only 2 lbs including its battery.)