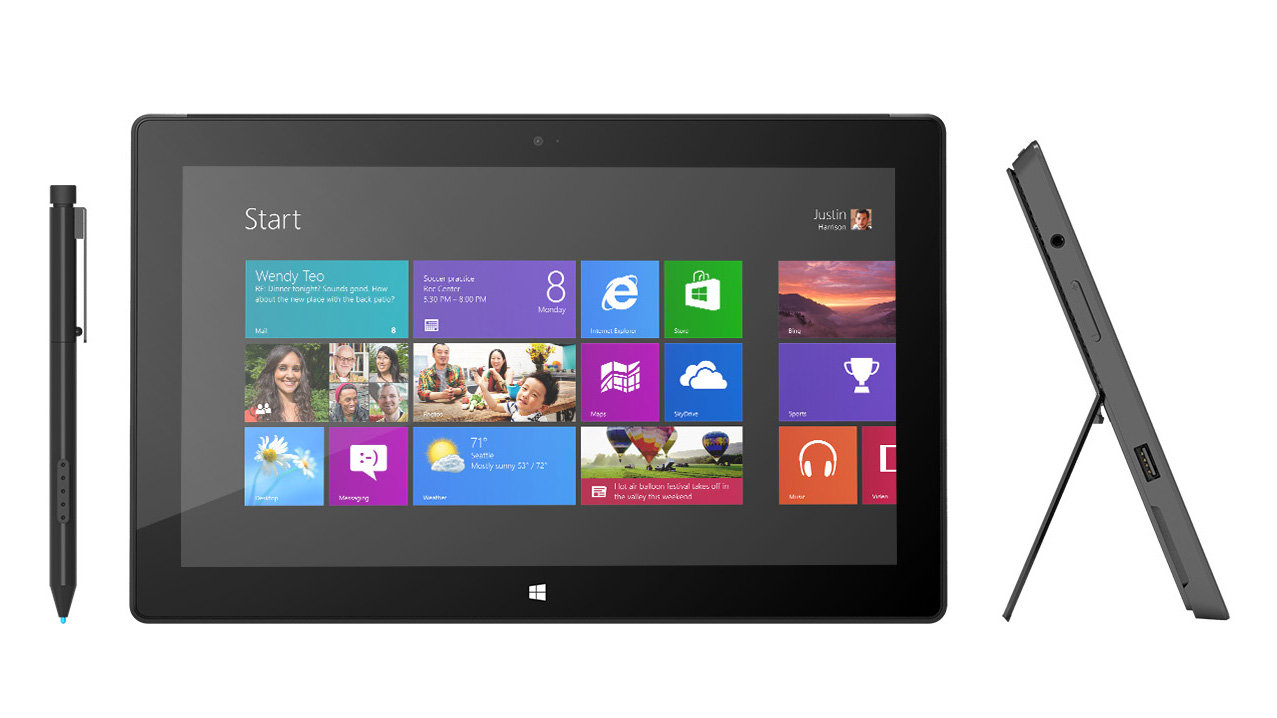 There are issues with Microsoft’s supply chain for the new Microsoft Surface – specifically the 128GB version.  Some people have accused Microsoft of trying to “Apple it” and engineer a sell out, but the problems are deeper than that and are the result of a supply shortage.

Let’s work backwards from what we know now.

You don’t engineer a product sell-out by shipping one unit to each retail location.

First of all, it’s too obvious.  In the world of social media, it’s too easy to share your experiences with people across the globe and the twitterverse was blowing up with complaints about Best Buy reps claiming that they were only shipped one to sell.  I personally checked out two Best Buy stores in the DC area and reps in both stores said the same thing: we were only shipped one Surface.  I visited a Microsoft “specialty store” (read: kiosk) and they said they were shipped “about 50” and “sold out earlier”.  “About 50” is the exact same quote I keep hearing on Twitter which makes me think that this is the line they were told to repeat. I didn’t personally check Staples stores because i figured they were even lower on the totem pole than Best Buy when it comes to electronics, but from what I’ve gathered, they also received one (or in some cases zero) Surfaces.

Assuming that Microsoft shipped one tablet to each Best Buy, one to Staples, and 50 to each of their retail stores, we know there aren’t many Surfaces in circulation:

You don’t engineer a product sell-out with 9,200 units.

That’s the equivalent of me baking six cupcakes and going to a bake sale with 10,000 people and claiming I’m the best baker in the world because I could move six whole cupcakes in the first hour of the event.  It’s ridiculous.

Microsoft could engineer a product sell out with 92,000 units or maybe even 920,000 units.  The absurdly low estimate of the number of Surfaces shipped highlights the fact that this is not an engineered sell out.  It’s almost as if this memo was issued:

As you know the Surface Launch is in 4 days, but we only have 10,000 Surface Tablets in our warehouse.  We can’t push back our release any farther, so, in order to meet our public launch date of February 9th, we have been forced to strategically release what little inventory we have.  To satisfy our contractual obligations with our distribution partners at Best Buy and Staples, we will send each retail location one tablet for sale.  The remaining tablets in inventory will be equally distributed amongst our Microsoft retail stores and all online ordering (and back-ordering) will be disabled as we do not know when we will receive any additional tablets.  Please instruct our sales reps to be as generic as possible when discussing delivery quantities (say “about 50”)  and indicate that we “sold out earlier today”.  Do not offer guesses as to when new shipments will arrive.

Lack of preorders was a clue

Microsoft took preorders for the Surface RT, but not for the Surface Pro and that should have been the first indicator that there were supply issues.  Had Microsoft been sitting on a pile of tablets, they would have started presales and have them delivered on the 9th as everyone else scrambled to the stores.   Had they taken preorders, they couldn’t have satisfied their requirements to launch with their retail partners because there would have been no units in any store.

Microsoft originally had slated the Surface tablet to hit the markets around the holidays and then pushed that to “January 2013” which then became “Early 2013”.  It’s anyone’s guess as to why they missed these dates, but there are two main reasons that companies miss deadlines:  1) The product isn’t ready; or 2) There is a shortage of supplies.

I read somewhere that a Staples sales rep remarked that the 128GB version didn’t exist.  Not that Staples didn’t have it, but that Microsoft hadn’t released it.  Of course this could have been a snarky comment from a disgruntled sales rep who had been asked the same question a thousand times that day, but he might not be far off of the mark, either.  It’s a distinct possibility that the 128GB Surface Pro does not exist.  I’m only one person, but I haven’t come across a single human (in person or online) that actually has one.  I’ve seen plenty of people taking photos of their Surface box, but that doesn’t show which version it is.  I’ve seen people claim to have one on eBay, but scammers are everywhere.  I’d love to hear from someone who actually has one.

Microsoft is on damage control 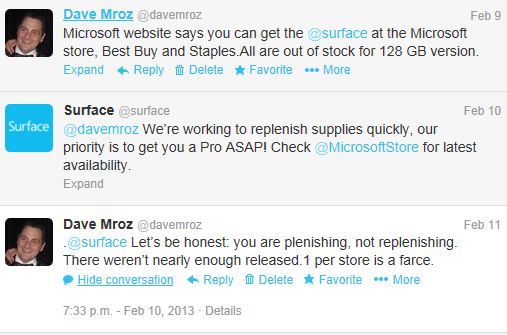 They’re repeatedly tweeting that they’re sorry that there are no Surfaces in stock and that they’re working hard to “replenish” inventory.  There was no inventory to speak of, so how they’re restocking is a mystery.

And then today Microsoft releases an announcement on availability but actually says nothing at all. http://blog.surface.com/b/surface/archive/2013/02/12/update-on-surface-pro-retail-availability-u-s-and-canada.aspx  (As of 07/03/2019 link is now defunct.)

We know some retail and online locations have been low or out of stock of Surface Pro and we’re working to address this. Here is what we are doing and what you can expect.

In the U.S., we are shipping additional units of the 64GB SKU to Best Buy, Staples and Microsoft Store now. We are shipping 128GB SKU later this week to retailers, with some units available by the end of the week.

Translation: we’re shipping more 64GB versions and we’re hoping that it placates you.  We know you don’t want the 64GB model, but that’s all we have to ship because the 128GBs aren’t ready.  to say that “some” locations are out of stock is insulting to the customer.  It’s not one store in Des Moines that’s out of stock – it’s every store in every city and people on every social media platform are validating these claims.

With each day that passes I’m becoming more and more inclined to believe that the 128GB version doesn’t really exist.  At best, Microsoft has some serious issues with their supply chain.  At worst, the 128GB version never rolled off of the assembly line (or did so with such problems that MS mothballed them all).  Regardless, I wish they’d treat their customers like adults and fess up to what the issues are.  Bad news may sting to those of us who have been holding our breath waiting for the product release, but being honest and including us in what’s going on will keep us as customers.  Hiding the truth will force us to question whats going on and to shop elsewhere.

If you actually managed to get a 128GB version of the Surface, let me know.